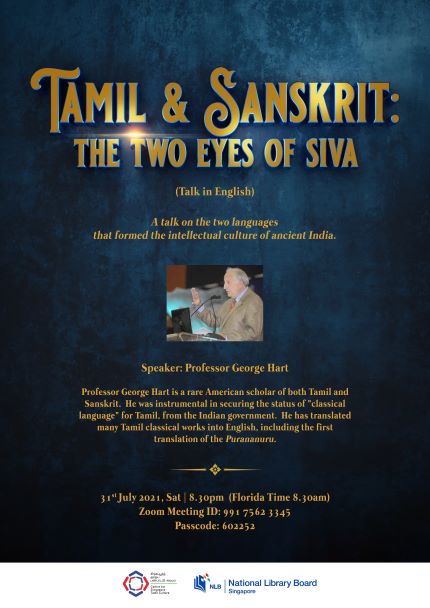 By virtue of their antiquity, independent tradition and rich body of ancient literature, both Tamil and Sanskrit are among the great classical languages of the world. They spawned vastly different and independent legacies in language and literature. Perhaps, no one knows this better than Professor George Hart, a rare American scholar of Tamil and Sanskrit, who received his PhD in Sanskrit from Harvard University in 1970 and has been a Professor of Tamil at the University of California, Berkeley since 1975. He also played a seminal role in securing the status of “classical language” for Tamil from the Indian government.

CSTC & NLB are delighted to invite you to a talk in English by Prof. Hart titled “Tamil & Sanskrit: The two eyes of Siva” where he will shed light on how Tamil and Sanskrit, together formed the intellectual culture of ancient India.

This talk is jointly organised by the Centre for Singapore Tamil Culture and the National Library Board.