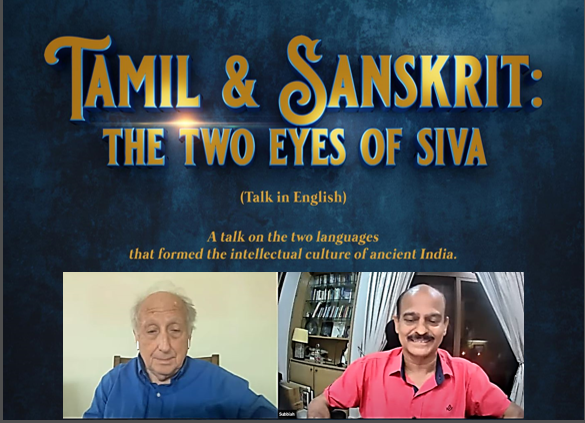 Perhaps no person of Western origin has done more to champion the cause of the Tamil language as Professor George Luzerne Hart, III, 76.

In the 1970s Professor Hart founded the Tamil department at the University of California, Berkeley. He is also the author of The relation between Tamil and classic Sanskrit literature. In addition, he was the first to completely translate the Purananuru (புறநானூறு), the 400-poem text of the Sangam age as well as The Forest Book of the Kamba Ramayanam (கம்ப ராமாயணம்).

One of his greatest contributions to Tamil was his role in getting Tamil recognised as one of the classical languages of the world, something he had been advocating for, for decades. In 2000, the Tamil Nadu government invited him to write a letter in support of this. In 2004, the Indian government declared Tamil a classical language, one of two from India, alongside Sanskrit, citing Hart’s letter as one of the key documents influencing its decision.

At a talk organised by the Centre for Singapore Tamil Culture and the National Library Board recently, Tamil and Sanskrit: The Two Eyes of Siva, Hart extolled his admiration and the virtues of Tamil, occasionally breaking into melodic recitals of some of the great literary works. 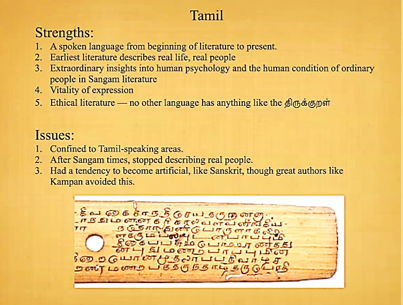 Acknowledging the long age of Tamil – it has been in existence for 5,000 years – Hart however added: “The greatness of Tamil is not its age. It is its literature and its culture.”

He also highlighted some of the similarities and differences between Sanskrit and Tamil, such as how both have spawned great foundational literature: “In Sanskrit, we can count the Vedas, the Mahabharata and the Ramayana… for Tamil, foundational literature is Sangam literature and Kamban’s great Ramar Avataram (ராமர் அவதாரம்).” Hart also paid tribute to ethical literature – Thirukkural (திருக்குறள்): “Thirukkural is a good example of how Tamil is able to compress things down to a few words … there’s nothing like Thirukkural in any other language.”

However, he pointed out how while Sanskrit became the lingua franca of half the world in the first millennium, it is no longer spoken today. On the other hand, despite Tamil’s long history of five millennia, while it is still in usage, this is largely “confined to a few Tamil speaking areas.” Tamil is only spoken by people to whom it is native.

The greatness of Tamil is not its age. It is its literature and its culture.

Perhaps as a study in maintaining cultural diversity, Hart mentioned: “One of the most fortunate things about India is that it’s able to accommodate all of the different groups who live in it and let them nourish their own identity as both Indians and as Tamils or whatever else they might be.”

However, despite this, he expressed some sadness: “One of the things which bothers me about India is that people outside Tamil Nadu simply don’t want to accept the fact that Tamil is an important classical language… in the West nobody has a problem (similar to this). English people realise that Latin and Greek are their classical languages. Why shouldn’t someone in U.P. (Uttar Pradash) realize that Tamil and Sanskrit are the classical languages of India?” 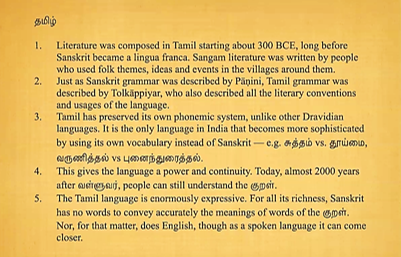 He added: “What sets Tamil people apart is their language and their history. If you go into some place in Tamil Nadu and talk to someone who’s just marginally literate, he’ll still know something about Tamil and its history and its literature … Tamils have an identity that is better defined and clearer than any group in South Asia and this is the தனி சிறப்பு (special greatness) of Tamil.”

Hart also paid tribute to Tamil scholars: “The Tamils have done an extraordinary job in keeping their literature going – this is something which needs to be remarked on because we are all grateful to the people who spent their lives keeping this great tradition going.”

Although more than 500 people tried to tune in to the talk, only 500 people were able to, due to a cap on the number of people allowed by the Zoom facility, indicating that the organizers underestimated the level of interest in the session. “A very happy problem,” moderator Subbiah Lakshmanan acknowledged.

Running in a “thaarumaaru” way, to raise funds